Medicine and physicians abroad. Circulation of experts and expertise in the Second Millennium BCE in the Ancient Near East

On April 21st, 2022, the members of the RTG 1876 “Early Concepts of Humans and Nature” met for the first plenary session of the summer semester 2022. During this digital meeting, Letizia Savino, associated doctoral candidate at the RTG 1876, presented her dissertation project “Medicine and physicians abroad. Circulation of experts and expertise in the Second Millennium BCE in the Ancient Near East”, on which she has been working since April 2021.

Savino began by highlighting the importance of the research area of rituality for the study of Mesopotamian literature and wisdom. Referring to her dissertation, she presented the distinction between ritual medical practices (āšipūtu) and ‘rational’ medicine (asûtu). The incantation priest (āšipu or mašmaššu) was the specialist who performed ritual medical practices, whereas the physician (asû) was the specialist in ‘proper’ medicine. Savino argued that medicine and medical rituality have proven to be a permeable genre, in which influences of ‘foreign’ traditions can often be adopted and integrated in ‘local’ (ritual) medical practices. In general, such influences can be seen in various aspects, such as specific gestures, the language used during recitation, the actual importation of foreign rituals from abroad, or alternatively the adaptation and, or translation of foreign rituals.

Previous research has already focused on specialists who travelled throughout the Ancient Near East, but there is no in-depth analysis of the mobility of medical experts in particular. Savino’s research subsequently focuses on the mobility of medical and ritual-medical specialists and, or the requests for ingredients to prepare remedies in the Ancient Near East during the Second Millennium BCE. For this purpose, she uses textual sources from the Second Millennium BCE, especially epistolary correspondence (Fig. 1), namely that coming from Tell el-Amarna, Mari, Hittite sites, etc., as well as receipts and medical texts. In this context, ‘foreign’ and ‘abroad’ are whatever practice or region different from the one taken in exam: ‘local’ can be referred to either a specific city (e.g., Mari, Ugarit), a kingdom or an empire (as for Egypt or Ḫatti), or a geographical region (e.g., Babylonia). Knowledge of local practice is of course required in order to understand the extent of the influences and to discern points of contact or differences. Savino’s research will elucidate two parallel research directions. She is particularly interested in the kind of expertise that was requested ‘abroad’. Therefore, the question to ask is: who were the medical specialists who travelled abroad (asûs/physicians, āšipus/incantation priests, barûs/diviners, etc.), and whence, and whither? Moreover, she aims to answer the following question: what kind of products were requested and exchanged for medical purposes? In order to gain knowledge about that, Savino also considers from whom and to whom these products were requested. In addition, she asks whether these products were already prepared medicines and drugs, or whether plants, minerals, and herbs were also exchanged.

Savino then presented some textual evidence. Numerous letters have been found all over the Ancient Near East that testify the requests from private citizens and kings for specialists or for already prepared medications or ingredients. Savino’s survey began with a case study concerning requests from the Hittite king Ḫattušili III. Ḫattušili III suffered from a severe ophthalmological illness and was in need of foreign knowledge and specialists. An example of this can be seen through CTH 809, an Akkadian asûtu text found in the Hittite capital Ḫattuša, in which typical actions performed by the physician to cure eye illnesses are described; nonetheless, the use of this tablet containing Mesopotamian medical expertise was not sufficient to cure the king completely (Fig. 2). 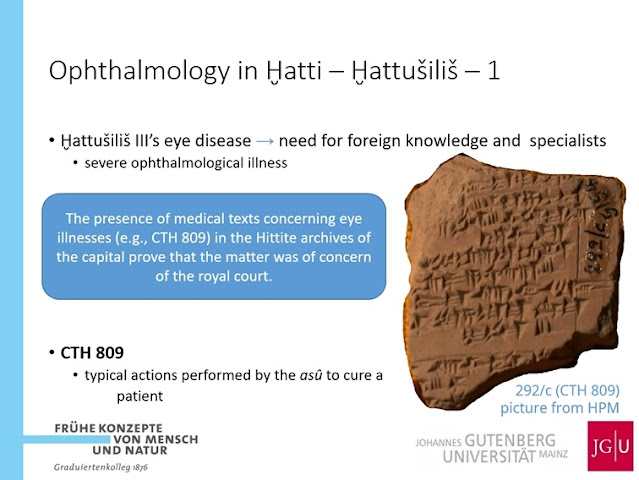 After presenting several textual examples coming from the correspondence between Ḫattušili III and both Kadašman-Enlil of Babylon and Ramses II of Egypt, Savino reconstructed the actions taken by the Hittite king regarding his own eye illness as follows:

2) attempt to gain ophthalmological medical knowledge by studying foreign tablets such as CTH 809, which, again, failed

4) the physician became ill, thus not being able to cure the king

Based on an analysis of the various textual sources, Savino concludes that the mobility of foreign specialists was important in the field of medicine and ritual medicine. Her case studies showed that the Hittite king requested medicines, ingredients, and specialists from different areas of the Ancient Near East, namely from Babylonia and Egypt. The requested expertise focused on ophthalmological diseases to ail the Hittite king, but also later his nephew Kurunta of Tarḫuntašša, as well as gynaecological problems concerning the sister of the king, princess Maššanauzi.

The session ended with a lively discussion about the existence of female specialists or physicians. Savino opened an interesting discussion on whether the exchange of medical specialists was a matter of prestige in addition to medical needs, especially for the Hittite king, which, according to Savino, is most likely. Her interesting project awaits further results, which will be crucial for studying the mobility of foreign medical specialists, and ingredient requirements.