A Report of the First International Conference on Historical Medical Discourse, Milan

A weblog entry by Shahrzad Irannejad.


From June 14th to the 16th, the Department of Foreign Languages and Literatures at the University of Milan hosted the First International Conference on Historical Medical Discourse (CHIMED-1). The general interest of the conference concerned medical discourse in historical perspective across disciplinary fields and research areas, such as: historical linguistics; historical lexicology and lexicography; medicine in/and literature; history of science, medicine and medical thought; history and social function of medical institutions; popularization of medical thought; translation of medical texts; medicine and cultural attitudes; and medicine and society. I used this opportunity to share with experts how I am integrating Translation Theory and Historical Semantics in my PhD project and receive feedback. As there were parallel presentations and some presentations were in Italian (which I, unfortunately, do not speak), this report is by no means a comprehensive report of the entire event; rather, a report of the presentations I personally found relevant to my work.
﻿﻿

﻿﻿On the first day, Giuliana Garzone and Paola Catenaccio (Milan) talked about "Disseminating medical knowledge in the 19th century: discourse analytical perspectives" (Fig. 1). They discussed the frequency of occurrence, collocation and concordances of their selected terms "knowledge", "experience", "theory", and "evidence" in their corpus, which was based on three major medical texts in the 19th century. They also discussed the structures of the three texts and stressed the importance of analyzing the introductions of the texts. Eleonora Ravizza (Bergamo) discussed "Colonialism and cultural hybridity at the intersection of medical and literary discourse". The underlying theme of her presentation was the notion that our experience of our physical body is mediated through language and is thus socially and culturally charged. She also discussed the relationship between disease and foreignness and drew on Susan Sontag’s Illness as Metaphor. The first day ended in a very interesting social event, in which we visited the archives of the Ca' Granda Hospital which housed many medical documents and objects going as far back as the 11th century (Fig. 2 and 3). 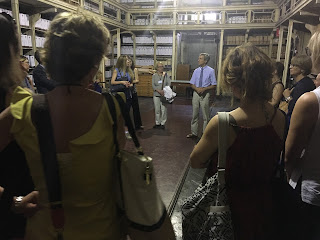 ﻿﻿
In day two of the conference, Lucia Berti (Milan) presented her paper entitled "Italy and the Royal Society: medical papers in the early Philosophical Transactions" based on her current PhD project. After introducing the Philosophical Transactions as important sources for the study of Anglo-Italian relations in the 17th century and after some theoretical background regarding her approaches to text analysis, she analyzed 23 medical papers written between 1665-1706, and discussed their language, genre, subject area, structure, and linguistic features. Elisabetta Lonati (Milan) talked about "Diffusing medical knowledge among the people: the socio-cultural function of medical writing". She examined the introduction of her primary sources and went on to discuss the attitude in the sources towards the relationship between intelligibility of medical texts and their utility. Tatiana Canziani and Marianna Lya Zummo (Palermo) presented their paper entitled "Prefaces in medical dictionaries: from moves to rhetorical Analysis". They dissected eleven medical dictionaries published 1809-1900 and discussed the rhetorical structure of their prefaces and introductions. Based on the audiences presumed for these dictionaries, they discussed the socio-cultural practices and assumptions embedded in these texts.
Massimo Sturiale (Catania) talked about "Pronouncing medical terms: norm and usage in pronouncing dictionaries". Focusing on four main pronouncing dictionaries from the eighteenth and early nineteenth centuries, he discussed and compared various examples of stress placement, spelling and pronunciations presented in these dictionaries. Alessandra Vicentini (Insubria) presented "A brief history of 19th-century English medical lexicography: authors, editors and texts". After giving some background about the scientific context of these dictionaries, in which she discussed the dramatic increase in specialized terminology which necessitated the publishing of dictionaries, she analyzed the needs, motivations and actors involved in compilation of five major dictionaries compiled in the 19th century.


In an attempt to implement one of the suggestions raised in our previous workshop on delivering public speeches in English at our RTG, I began my presentation with a story; especially because I was the last presenter in a long conference day: I had found mention of the theory of Inner Senses and Ventricular Localization in one of the stories of One Thousand and One Nights, recounted by Shahrazad the legendary storyteller. I think you can imagine my excitement as I came across this story. I received good feedback after my presentation (Fig. 4); members of the audience saying how the story helped them find relevance to my presentation and my research. I took as my departure point an 18th century Persian medical encyclopedia which mentions the theory of the Inner Senses. I then went back in time and showed how the expansion and development in the Aristotelian concepts of phantasia and koine aisthesis yielded the five inner senses described in this text. Using Historical Semantics and Translation Theory, I tried to show how transliteration, calque and translation of Greek terms yielded the Arabic, and later Persian, terminology that explained sensation, cognition and its impairment in the pre-modern Persianate world.


On the third day, Silvia Demo (Padova) talked about reception of Galen in Nicholas Culpeper's work in her talk "What medicine is. Galens Art of Physick". She presented and analyzed Culpeper’s translation of Galen's famous book. She drew attention to the fact that Culpeper inserts his own comments in the translation, and that he adjusts some recipes based on the ingredients available to his English reader. In a quite engaging presentation, Paul-Arthur Tortosa (Florence) talked about "Tables and Content: the writing practices of French military doctors between case-study and arithmetic medicine, 1792-1800". He introduced two major texts that explicitly discussed the emergence of the medical discourse, namely, Michel Foucault's The Birth of the Clinic (1963) and Erwin Heinz Ackerknecht's Medicine at the Paris Hospital, 1794-1848 (1967). His talk circled around the notion that medical lists and tables emerging in the 18th century made medicine look more "rational". He discussed how massification of warfare in this century caused reconfiguration of medical writing practices.


In the end, organizers of the conference Prof. Giovanni Iamartino and Dr. Elisabetta Lonati concluded the event by thanking all those involved in organizing the event, especially Lucia Berti, PhD candidate at the Department of Foreign Languages and Literature. They concluded by saying that they hope that the Conference on Historical Medical Discourse would continue to be held in the future. There is a prospect of this happening biannually, in Helsinki and Canary Islands in the near future. I, too, hope this future would soon be realized.